Beginning in 1958, Manuel Neri embarked on a group of Abstract Expressionist paintings and related works on paper entitled the Window Series, which represents several innovations that were occurring in American art during the Post-War era. After World War II, American artists were attempting to create a new way of artistic expression that was uniquely "American," in order to emerge from the shadows of European modernism. One of the important innovations was the redefining of the picture plane so it was no longer a window into another space or world. Instead, these artists were unapologetically claiming that the canvas was flat and merely a support for paint. By eliminating the traditional hierarchical space of foreground and background, sky and ground, the paintings' elements exist on the surface.

This tension of flat verses implied depth is visible in the pastel studies for Neri's Window Series. Neri places a floating square, reminiscent of a window, near the center of the composition, which echoes the borders of the paper. By doing so, he beckons the viewer's attention to the picture plane as window, while the aggressive paint handling and shallow compositional space prevents one from looking through to the outside. The result is an obviation of the window itself and the painting becomes a purely Abstract Expressionist construct. This early exploration of the tension between the real and the abstract is one of the central concerns in Neri's ongoing work in sculpture, drawing and figurative painting.

In 2006, Neri received the Lifetime Achievement in Sculpture Award from the International Sculpture Center, and in 2008, he received the Bay Area Treasure Award from the San Francisco Museum of Modern Art. His work is included in more than thirty American public collections including the Metropolitan Museum of Art and the Whitney Museum of American Art, New York; the San Francisco Museum of Modern Art; and the Corcoran Gallery of Art, Hirshhorn Museum and Sculpture Garden, and Smithsonian American Art Museum, Washington, D.C. 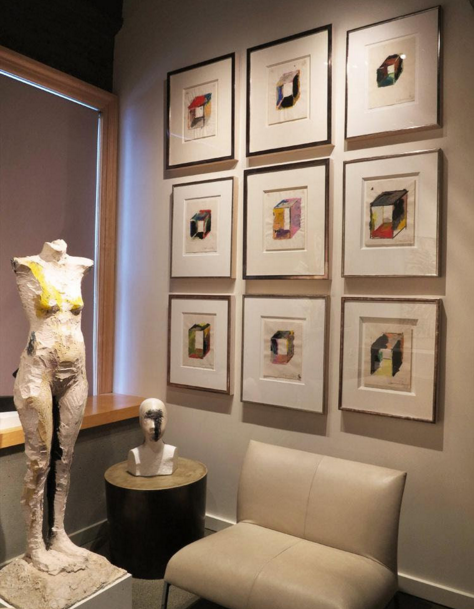 Grid of pastel studies for window series, 1968, mixed-media on paper