"It is Olitski who has developed and revised Jackson Pollock's central innovation, the allover picture, in order to make it serve color. In so doing he has drawn radical and far-reaching conclusions about the nature of the abstract picture-conclusions that have taken on inescapable authority." - Kenworth Moffett*

Hackett Mill presents eight of Jules Olitski's early spray paintings on display for the first time from the Olitski Estate. This is only the second exhibition of Olitski's work to take place on the West Coast and follows Hackett Mill's 2010 exhibition, Embracing Circles: 1959-1964.

The paintings in the show, titled Jules Olitski, Colorness, The Early Spray Paintings 1965 to 1969, are from a small group of work Olitski held back for his personal collection at the advisement of his close friend and champion, Clement Greenberg. Arguably the twentieth century's most influential art critic, Greenberg paid a personal visit to Olitski's studio and was so taken by the painter's latest innovation with color that he strongly urged Olitski to keep them for himself.

Like other Color Field painters including Helen Frankenthaler, Kenneth Noland and Morris Louis, Olitski was dedicated to exploring color as the subject of his work and with the various techniques that he developed, Olitski further defined the mature vocabulary and our experience of Color Field painting. In 1964 when Olitski was teaching at Bennington College in Vermont, he sought a way to capture "nothing but some colors sprayed into the air and staying there." He moved away from the staining technique he developed for his Core paintings (1959-1964) and experimented with a new form of paint application using a spray gun and a compressor. Olitski said, "The color cloud suddenly appeared real....A mist of color had spread itself on part of the canvas. It was ravishing. A new light, a new color; I was Apollo...A world of possibilities had opened. In this manner I covered the canvas."

The resulting paintings are luminous celebrations of color. The "mist" Olitski described is captured and preserved on the surface of the canvas in modulated layers. In Pink Hoodoo the spray is fine and even, punctuated occasionally by thick drops of vibrant pink pigment. In other paintings, including 'Purple Love', the spray is more dense and substantial. Here the pigment pooled together to form a supple layer over the canvas though lighter hues of earlier sprays are still visible in patches throughout the painting. These canvases document Olitski's earliest experimentations with his new spray technique on both a small and monumental scale.

Hackett Mill invites you to experience why Clement Greenberg famously referred to Olitski as the greatest living painter.

The exhibition is accompanied by a full-color catalog with texts by Rosalind Krauss, Clement Greenberg and Karen Wilkin. 'Revelations: Major Paintings by Jules Olitski,' an exhibition of five decades of Olitski's paintings, traveled to the Kemper Museum, Kansas City, Missouri, the Museum of Art, Houston, Texas, the Toledo Museum of Art Toledo, Ohio, and the American University Museum at the Katzen Arts Center, Washington, D.C in 2011-2012. 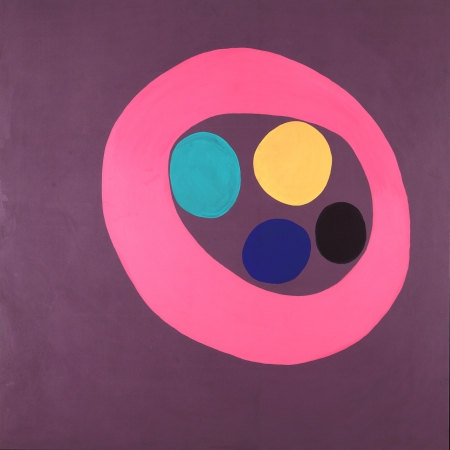